Cranes make up the family, Gruidae. They are large, long-legged and long-necked birds in the group Gruiformes. There are fifteen species of crane in four genera. Unlike the similar-looking but unrelated herons, cranes fly with necks outstretched, not pulled back. Cranes live on all continents except Antarctica and South America.

They are opportunistic feeders that change their diet according to the season and their own nutrient requirements. They eat a range of items from suitably sized small rodents, fish, amphibians, and insects to grain, berries, and plants.

Cranes construct platform nests in shallow water, and typically lay two eggs at a time. Both parents help to rear the young, which remain with them until the next breeding season.

Some species and populations of cranes migrate over long distances; others do not migrate at all. Cranes are solitary during the breeding season, occurring in pairs, but during the non-breeding season they are gregarious, forming large flocks where their numbers are sufficient.

Most species of cranes have been affected by human activities and most are classified as threatened, to critically endangered. The plight of the Whooping Cranes of North America inspired some of the first US legislation to protect endangered species. 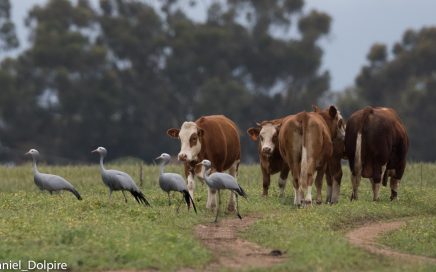 Cranes are large to very large birds, including the world's tallest flying bird. They range in size from the Demoiselle Crane, which measures 90 cm (35 in) in length, to the Sarus Crane, which can be up to 176 cm (69 in), although the heaviest is the Red-crowned Crane, which can weigh 12 kg (26 lb) prior to migrating. They are long-legged and long-necked birds with streamlined bodies and large rounded wings. The males and females do not vary in external appearance, but on average males tend to be slightly larger than females.

The plumage of the cranes varies by habitat. Species inhabiting vast open wetlands tend to have more white in the plumage than do species that inhabit smaller wetlands or forested habitats, which tend to be more grey. These white species are also generally larger. The smaller size and colour of the forest species is thought to help them maintain a less conspicuous profile while nesting; two of these species (the common and sandhill cranes) also daub their feathers with mud to further hide while nesting.

The long coiled trachea that produces the trumpeting calls of cranes

Most species of crane have some areas of bare skin on the face; the only two exceptions are the Blue and Demoiselle Cranes. This skin is used in communication with other cranes, and can be expanded by contracting and relaxing muscles, and change the intensity of colour. Feathers on the head can be moved and erected in the Blue, Wattled and Demoiselle Cranes for signalling as well.

Also important to communication is the position and length of the trachea. In the two species of Crowned Cranes the trachea is shorter and only slightly impressed upon the bone of the sternum, whereas the trachea of the other species is longer and penetrates the sternum. In some species the entire sternum is fused to the bony plates of the trachea, and this helps amplify the crane's calls, allowing them to carry for several kilometres.